So to kick things off, what exactly is profiling? Profiling is the measurement of which parts of your application are consuming a particular computational resource of interest. This could be which methods are using the most CPU time, which lines allocate the most objects, where your CPU cache misses are coming from, etc..

There are two predominant ways profilers are implemented. The first and earliest type are instrumenting profilers. They work by instrumenting the program under test in order to collect information about the resource of interest. For example if you wanted to calculate how much time methods were taking to execute an instrumenting profiler would add instructions to the beginning and end of each method to capture the current time which could then be used to reconstruct the duration spent inside each method.

The most common type of profiler is the sampling profiler. They work by interrupting the application under test periodically in proportion to the consumption of the resource we’re interested in. While the program is interrupted the profiler grabs a snapshot of its current state, which includes where in the code it is. After the state is captured the program continues. For the method timing example earlier, a sampling profiler would interrupt the program after a certain amount of time had elapsed and capture its state. It would then aggregate those samples over time to produce a statistical picture of the state of the application. You could use the percent of samples that contained a method of interest to calculate how much time was spent in that method (though not the duration of that method). 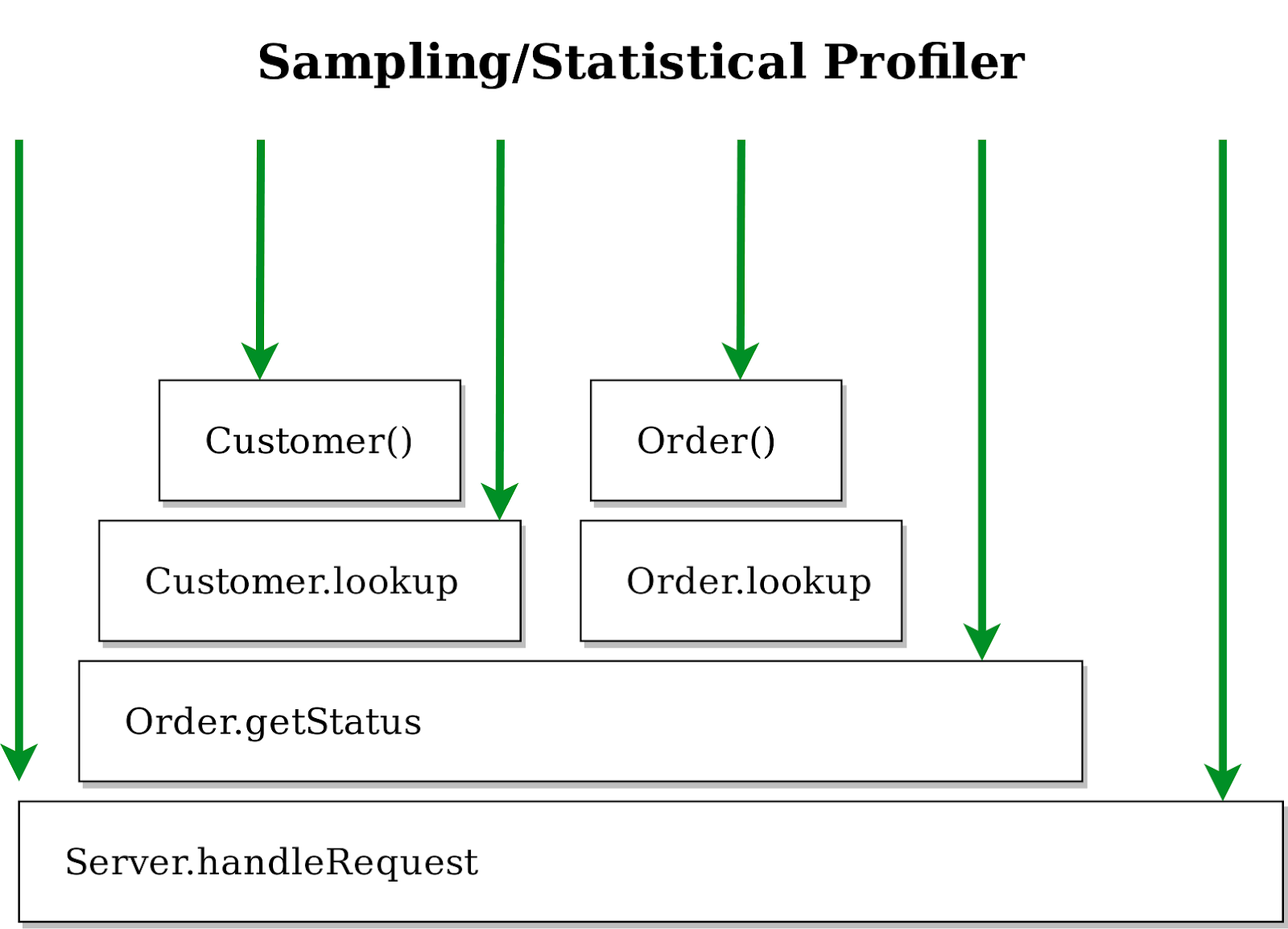 The above is an example of an idealised sampling profiler. The black boxes represent the call stack, a box above is called by a box below, and the green lines indicate the points at which the profiler interrupts and captures the call stack of the application. Our first sample would be in Server.handleRequest(), the second sample would show us being in the Customer constructor with a stack trace as follows:

In the next post you’re going to see how there’s more than just one type of time when it comes to profiling and why looking at the right timing type can be a crucial part of solving a performance issue.

Profiling can be about time.. but which time? - Profiling In Production Series #2

The last post in our Profiling in Production series we covered instrumentation and sampling profilers. We talked about “resources of interest” but which ones are the most useful for diagnosing performance bottlenecks? The most commonly used resource is time. We’ve been deliberately vague about the concept of timing so far because when it comes to computers there’s actually two types of timing..

When TransferWise first started using Opsian’s Continuous Profiling platform they had a service with a peculiar and elusive performance problem, one that had stumped existing performance monitoring tools. This post covers the symptoms of the mysterious problem and how TransferWise used Opsian’s tools to track down and solve it.

If you’ve ever struggled with optimising Java’s Garbage Collection performance in production then our newest feature, Continuous Allocation Profiling, is the tool for you. It breaks down allocations by type and by line of allocating code, live from your production environment to give you all the information you need to optimise the parts of your applications with excessive allocation behaviour.

The JVM’s garbage collectors make use of Thread-Local Allocation Buffers (TLABs) to improve allocation performance. In this article we’re going to understand what TLABs are, how they affect the code generated by the JIT for allocation and what the resulting effect on performance is. Along the way we’ll learn about the organisation of CPU caches and how multiple CPU cores keep their contents coherent and how you can use this knowledge to avoid multithreaded scalability bottlenecks.